Poor weather reduced the activity of the Squadron this month, although there was a slight increase in Night Flying hours for Broody compared to May.

The month was, however, the most successful to date for the Squadron, with a total of nine enemy aircraft destroyed as follows:

Terry Clark remains something of a legend. As one of the remaining “Few” who flew in the Battle of Britain, he is still regularly referred to in the press.

During the Battle of Britain, he flew in 219 squadron, pairing up with Dudley Hobbis in what was to become a long partnership and deep friendship. Both men were posted out of 219 Squadron into separate training roles, but were were reunited at 488(NZ) Squadron during the Squadron’s time in Ayr. Sadly,  you will remember that Hobbis was killed on 25/xi/43 with Oliver Hills when their Port engine caught fire during a Patrol.

Terry Clark was paired up with Douglas Robinson, and they claimed their first victory together in December 1943. The loss of Hobbis deeply affected Clark. Despite Robinson’s best efforts to help him through his loss, Clark was eventually requested a break from flying, and was transferred to North Weald as a U/T Controller in March 1944. He did make several visits back to the Squadron, as must have been the case today, with Robinson taking him back to his base.

The image below is a crop from the Squadron photo of February 1944, and shows Clark (Top Left) standing next to Broody. On the bottom row is Robinson (left) and Broody’s pilot, Jack Scott. 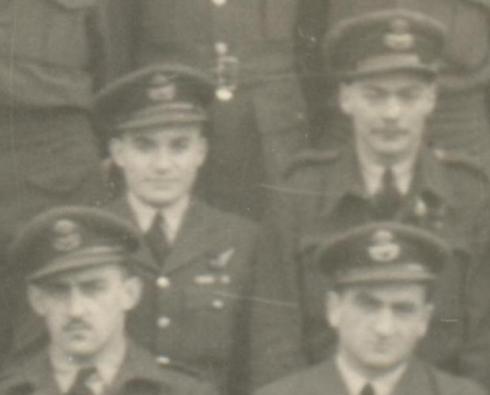 During my research, I came across this video from the Rare Tea Company, which features Terry Clark reminiscing about his time with night fighters – A wonderful find, I think.

Although Broody did not fly today, there is an entry in the ORB that I thought I would share.

“…In the afternoon, F/Lt Ricketts, Interrogation Officer from Middle Wallop gave a very interesting and amusing lecture to the Aircrew. He made clear how to behave in the event of anybody falling into enemy hands. F/Lt Ricketts also brought with him two knives of German make, which had come from Aircraft destroyed by the Squadron on the night of 14th May. These souvenirs were much appreciated by the Squadron and particularly by the recipients, the successful pilots of that evening F/Lt JAS Hall DFC and F/O Jeffs.”

As a boy, stories of POW camps, escape and evasion were my thing. In Broody’s collection are a few items that would have been used by Aircrew who found themselves behind enemy lines.

These include: 3 notes of “Invasion Currency”, a set of fly button compasses, a small brass button compass, a seam compass and a shirt stud compass. All to be used to assist in attempts to evade the enemy or escape and return to Allied territory. 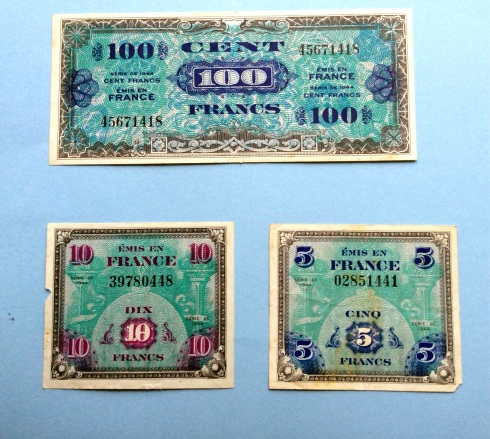 Fly-button compass. One button (L) has luminous paint indicating North & South. The other (R) has a small spike that the first compass sits on to allow it to swing freely.

A seam compass which would be hidden in the seams of clothing. When suspended from a thread, it would swing to indicate North.

A shirt stud compass. Originally, the glass would have been painted over, and only scratched off to reveal the compass needle when needed.

As there is a bit of a lull in Broody’s flying logs for a couple of weeks, I thought I’d go off on a bit of a tangent and share the following story with you.

An old friend commented on a photo of Broody that I posted on Facebook on the 70th Anniversary of D Day. She said:

“My great uncle was a navigator on a Lancaster – part of an Australian squadron – unfortunately he and his crew (3 Aussies, 4 Brits) didn’t make it. He was with 463 squadron. I don’t really know much of his story; he didn’t fly many missions before being shot down at the age of 21. I have his crew list; they are all buried in Liesse Communal Cemetery. One guy was 33 but the others ranged in age from 19 to 23. I have a pic of 6 of the 7 of them standing in front of a Lancaster, and another pic of their graves”

The temptation to delve into the story was too great to resist, so armed only with a name and a place of interment, I set out to see what I could discover about Fg Off Stanley Alfred Isham.

This is what I found:

I could not find any record of him with any Operational Training Units or Conversion Units, but knew from the initial information I had that he was posted to 463(RAAF) Squadron at RAF Waddington. There is no record of his arrival in the ORB for 463 Squadron, but he was not part of C Flight, 467 (RAAF) Squadron who formed the initial core of 463 in November 1943. Based on flights by McKnight as 2nd Pilot in December 1943, it is likely that was his date of arrival.

In total, he flew 7 Operational missions as detailed below. The first 6 were successfully completed, but the final flight on 25/02/44 was sadly the one he did not return from. There are no corresponding Luftwaffe / German AA claims for this aircraft, so most likely cause was a crash due to AC failure

All done with the power of the Internet – Thanks to all those who helped! What I did discover is that the National Archives in Australia have made publically available some ORBs for RAAF Squadrons. The national Archives in Kew should take note of this insightful step by the Aussies, as it makes historical research a lot easier and more accessible to all! You can search these records at http://www.naa.gov.au/collection/search/

So now we know a bit more about Stan Isham’s war time service – but can we expand on the story and fill in the gaps between enlistment in 1941, through training and conversion until he joined 463 (RAAF) Squadron in early 1944? And of course there is the photograph that Nic shared with me. The photo is not annotated, but can we identify the others in the picture?

“On patrol near Bayeux I was given 240 degs. By GCI 82, onto a bogey at 8 miles range, target travelling 320 degs. After various vectors contact obtained at 2 miles range, at 0220 hrs. Height 7,000 ft. Course 340 degs. Closed on gently weaving and climbing target and got visual of Ju.88, rnage 1,000ft, height 9,000 ft. Opened fire at 200 yds range, dead astern. Strikes seen and enemy aircraft peeled off to port. Second burst fired as he peeled off, without effect. Visual lost but contact held on AI as target dived to 4,000 ft, weaving. Second visual obtained at a range of 1,000 ft. Several short bursts were fired from which further strikes were seen. Finally, I closed to 100 yds, and E/A exploded after a one second burst. E/A disappeared below, flaming, and hit the ground where wreckage was seen clearly burning. Position probably 5 to 10 miles south west of St-Lô [approximate position given as 49°N 01° 10’W]. Debris was felt to strike own A/C and radiator temperature of starboard engine was seen to rise, so that airscrew was feathered and we returned to base, switching on the R/T when required. Landed Zeals 0325 hrs”

On this night, 488(NZ) Squadron scored its first success in the invasion Area after S/Ldr Bunting and his Nav/Rad F/Lt Reed intercepted and destroyed a Ju88 in the near Caen. Upon landing back at Zeals at 03:55, it was discovered that in addition to the superficial damage caused to Bunting’s aircraft from pieces of wreckage, an un-spent bullet from the Ju88 was lodged in the Starboard wing.

Given that the stated capacity of an Airspeed Oxford is 3 people, the trip from Zeals to Colerne must have been an bit of a tight squeeze!