I am not sure if the narrative above does actually mean that Broody was flying the aircraft, or if this refers to directions given by Broody to Jack ensuring the aircraft was flying in the right direction to vector on to the reported enemy aircraft. What does stand out is the ability to get to the operational height in such a short space of time – many decades before the rapid communications we take for granted nowadays such as satellite, internet and mobile phones. We can only imagine the heightened state of readiness these crew must have been at to be able to react so quickly.

A “catseye” patrol was a hunt for enemy aircraft without the use of A/I or ground support. It was essentially a search using the naked eye.

A long day for Broody & Jack. A first scramble in the early hours of the morning, followed by the regular afternoon NFT and a second scramble just before 23:00 that evening. Today saw Broody fly a total of 3 hours & 20 minutes.

The combats for Peter Hall and Dick Marriott took place during a scramble in aircraft HK228 (ME-C) at 22:00 on 24/ii/44, but apparently recorded by Broody on his return from the first scramble of the night. Hall’s combat report for the scramble was later annotated to show one HE177 and one DO217 as destroyed. Hall’s narrative on the combat report states:

“I was scrambled by North Weald at 2200 hours and ordered over to Biggin Hill control for freelance patrol at 18,000 feet. I chased several intersections in a southerly direction and, coming down to 14,000 feet followed an intersection in which I identified a Dornier 217 traveling S/W at about 300mph. I opened fire from 200 yards allowing 1½ ring deflection and observed strikes on the port engine and along the fuselage. Smoke began to pour out, and the e/a dived down toward the ground. As I came in for a second attack from starboard, the e/a disappeared below our port wing as we overshot. I made an orbit to port and went down after it to observe, but its contact could not be regained. We requested fix and the position is given as Q.8331, near Plumton Race Course, though the e/a may have crashed-some distance from this position.  I claim 1 DO217 Probably Destroyed with the request that this be stepped up in the light of available evidence and the report from the Ack Ack in this district that a plane came down at 2225 hours.

Continuing patrol in a Northeasterly direction I observed an intersection slightly below at about 13,000 feet and, chasing this, found the e/a approaching head-on; coming in from astern I identified the aircraft as a Ju188 and plainly saw the black crosses on the wings. The searchlights doused but I was able to follow visually after my first attack from 200 yards, practically dead astern. No strikes seen but as I gave him 3 further short bursts the port engine caught fire and the e/a went into a steep dive with pieces falling off. I followed him down to 7000 feet and the e/a was then observed to dive even more steeply and hit the ground, an explosion being seen quite plainly. The position of this crash was fixed by control as R.1555 – east of Wadhurst. I therefore claim a Ju188 destroyed.”

I know that Peter Hall was reluctant to talk about his wartime experience in later years. The combat report above is reproduced not to glorify the success of the crew of ME-C at the expense of the German aircrew who died, but to serve as a historical reminder of the reality of war. I hope that you, like me, will read it well and take a moment to think about the skill and ability of the brave airmen or the RAF and other allied air-forces as they fought to keep the Empire safe from attack.

On the morning of 21st February, after the night time patrols had ended, a pre-dawn attack was identified and crews were scrambled to engage the enemy – several for the second time that night. Amongst those who took off were Tohunga “Ricky” Riwai, the Squadron’s only Maori aircrew, and his navigator, Ian Clark. For reasons unknown, Ricky’s aircraft crashed into the steel anti-invasion defences beyond the airfield perimeter and both men were killed instantly. Leslie Hunt recalls how several individuals ignored the threat of the adjacent minefield and ran to give assistance to both men, albeit in vain.

Riwai and Clark had only been posted to the Squadron 75 days before, but all the background information I have read about the Squadron shows the high regard in which this crew were held, especially Ricky who was an extremely popular member of the Squadron.

Hunt said: “Words cannot express the feelings of the squadron after this tragedy – we had all come to regard Rick as one of the grandest types any of us have ever known, and with his shy but equally popular navigator, made a crew which we were confident would achieve great things” [Leslie Hunt – “Defence Until Dawn”].

Riwai and Clark were in the squadron photograph taken some 3 weeks before their death. I think that Riwai, sitting on the front row in flying boots, with arms and legs crossed exudes a mass of confidence and self-assuredness! 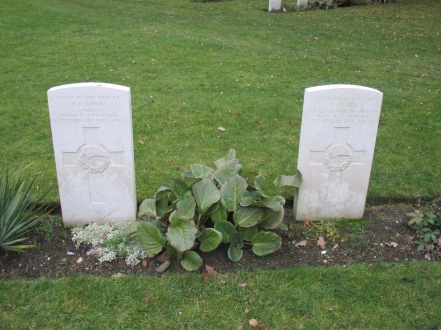 “Ricky” Riwai and Ian Clark were interred in the New Zealand Section of Brookwood Military Cemetery, next to the graves of their mates “Snowy” Watson and Ernest Edwards.

The photo below shows the graves of 4 airmen of 488(NZ) squadron side by side – 4 brave Kiwis who came to England to fight for the freedom of the British Empire, and now lie many thousands of miles from home.

As part of my research for this blog, I visited Brookwood and gave my thanks to these men for their sacrifices so that I could bring up my children in a free world. With each loss I record, the more and more of the reality of war is revealed to me. I feel a sense of huge sadness each time an anniversary is reached, and cannot even begin to imagine how these losses impacted on the members of the squadron who survived each clash with the enemy as they saw their friends die.

The loss of Riwai and Clark takes to 14 the total number of aircrew who have given their lives since the start of Broody’s tour in September 1943. Their names are duly recorded in the Roll of Honour.

On 18/ii/44, Nineteen Mosquito Mk.VI Fighter Bomber aircraft of 487, 464 ,21 Squadrons and the Photographic Reconnaissance Unit carried out an attack on Amiens Prison. 487 (New Zealand) and 464 (Australia) Squadrons were both Article XV squadrons.

For a good account of this Operation, I suggest you read this article on the RAF website

This is the first reference in Broody’s journal of a Pilot’s lack of ability. The last flight with Jack Scott was on 01/ii/44, followed by a lack of flying until 2 flights with Lt Davies on 12/ii/44 and 14/ii/44 and then today’s flight with F/O Wilson. Although I have no evidence to corroborate my theory, it is likely that Jack was on leave for this period.

There is no further information on why Broody thought Wilson’s flying was poor, but my grandfather was not a man given to dishing out criticism without good reason.

20:10
SCRAMBLE – Searchlights
Much activity – raid on Harwich & Ipswich, but no joy whatsoever.
1:35

The ORB shows that three crews were scrambled for this raid, with no success from any. Lt Davies was a pilot from one of the 3 crews from the Fleet Air Arm on secondment to the Squadron. He can be seen in the middle of the second row in the Squadron photo taken earlier in the month.